The Harmattan started blowing a week ago. It starts subtly, barely noticeable in the rattle of falling leaves. The ridges in the distance are just a bit imprecise, an impressionist painting rather than a photograph. During the day, it is no cooler, the mid-nineties, but at night the temperature falls after midnight to a bone-chilling 64⁰F. I am not kidding. Living in concrete or rammed-earth constructions, heat insulation is a foreign concept. Fires are for cooking and not heating. No other fabric is available other than the gaudy, imaginatively printed batik-decorated cotton.

The Harmattan is a wind that blows from the Sahara to the Gulf of Guinea during the dry season. The Sahara, super-heats during the day, creating a fixed high pressure zone, while the Gulf of Guinea, off the coast of Ghana has now cooled down. The wind picks up the finest particles. It is dry, and reflects the sun back, cooling the night. I have never been to the desert but I know its taste. Fine as talc, the dust gets into everything. Surfaces whipped clean at noon have a fine coating by dinner. The air becomes hazed with the dust, noticeable from ten feet off and enclosing us seemingly in a great globe of dust a few hundred yards wide. This is just the beginning. Ghanaians say that the wind, when it is bad, rattles windows and causes scorpion bites and skin rashes. (More scorpion sightings this last week …remember to turn out shoes left at the door overnight). It does give me a sore throat and a cough.

The leaves are dropping, leaving the branches bare except for the ‘frangi-pangi” tree with each branch adorned with a single yellow blossom at the very tip … and its lovely scent.

Received a 1.1kg (2# 6 oz.) baby last week. In the states, at delivery, the infant would have been immediately placed under a warmer and, except for a few rude intervals to get weighed, would never be far from a carefully warmed and protected environment. This little girl delivered at a health center. The mother was told to bring the infant to maternity at BMC, just down the street. She walked. By that time (60 minutes) the infant no longer had a measureable body temperature. The infant was transferred to Paediatics because we have the functional incubator. At 90 minutes I became aware of her and popped her into the incubator after only about 15 minutes of filling out forms (I sometimes think all of British rule was a ploy to infiltrate an entire continent with self-sustaining bureaucrats). Over the next three hours, every time I went to find the baby, she had been removed from the one effective treatment option I had: to place an IV, to feed, to be bathed (bathed!). At 4 hours, after never having gained a

measureable temperature she became apneic and was again removed. When I found her she had the cold grey-blue color, the clammy cool skin and the absence of a heart rate of the newly dead. I spent some time showing people how to effectively use a bag-mask to breathe for small infants. The death forms are very bureaucratic … and familiar.

Bureaucrats never give you enough space.

On a brighter note, malaria is on a bit of a holiday, we only admitted about six overnight. No new cerebral malarias. Enteric fever (probably Salmonellosis or Shigellosis if we could get the labs) is in a resurgence. We several docs watch the fever curves assiduously, looking at each peak and its aftermath, rather like overanxious grandmothers.

My burn patient is doing well so far. He suffered blisters to most of his back after “pulling the soup off the fire.”

“How is it that the burn is on his back and not his front?”

The dry season is the season of burials. That is not as grim as you might imagine. Generally, roads are better during the dry than the wet, and easier for travel. The malaria season is just too busy for anyone. People who die at other times of the year are buried rather rapidly. Then the family prepares for the funeral, this might take two years more. Afternoons and evenings are filled with the sounds of the big drums, beating an incessant rhythm, well past midnight. The area has three main faiths: Animism (over 65%, Islam 20% and Christian (Assembly of God, Baptist, Jehovah Witness and Catholic).

Animism (here since the earliest records) is administered by land priests, “shamans,” witch doctors, or however you wish to name them. Children I see frequently have ritual scarification around their navels (to reduce the almost universal umbilical hernias, and since they go away anyway, appear to work). The scarification is quite skilled, slicing through thin infant skin only partway, deep enough to scar but not deep enough to create a gaping wound. 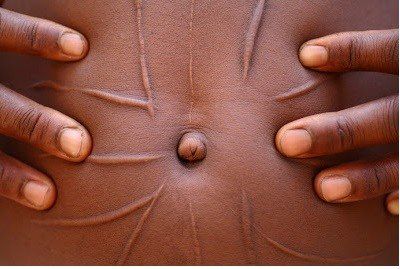 Some people I see have hundreds of them, collected over years of successfully treated (or non-fatal) illnesses. Many children wear medicine bags, filled with Who Knows What, and carefully sewn into a tidy amulet.

Islam came in with the Mamprugu Empire in the 13th century and its attendant Saharan slave trade. Slaves for Gold (Ghana was the Gold Coast). Many tribes, including the Mamprusi and the Dagomba, have origin stories of escape from the Nile Valley to escape Muslim slaving operations. Nevertheless, the Mamprusi have a veneer of Islam being for the court of the Niyiri (paramount chief), if not a state religion, at least an ornament. A Muslim must hold the throne for the Niyiri on his assent. Muslims are viewed as wealthier and they allow a good deal of syncretism with Animism. To become a Christian means a concrete break with the past. Old relationships end. Killings for converting from Islam, fortunately, have never been a large part in this country. To become a Christian is to put off the old things of a person’s life and to accept a new one, one with no reassuring icons, totems or amulets. It is tough. People’s joyful exuberance in the celebration of worship is understandable.

It is the Christmas season … and one can barely tell. If it were not for the (artificial) Christmas trees (a pagan holdover from Yule, the holiday at the winter solstice) I would not know it was. Nine more shopping days to Christmas.