Trip to the Wall 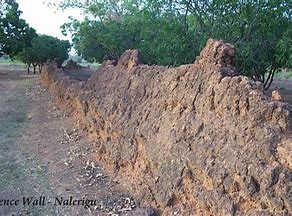 Trip To The Wall, Nalerigu, Ghana

Having a half-day free on Saturday, I decided to walk to the Nalerigu Wall, about two miles distant. The wall is old and its history is complicated. People do not frequently slow down enough in their rush to the future to post a sign about what they are doing, Facebook notwithstanding.

However, in this case, the Nalerigu Wall is well documented to be from the 17th century, built by order of a Na Atabia (1688-1742), the king of the Mamprugu Empire (begun about 1350 by the “the red hunter,” whose army took most of NE Ghana, southern Burkina Faso, and northern Toga) from the indigenous farmers who had been there already for centuries. The grandson, Na Gbewa, held the empire together but his sons would not. They split it (amicably) into four kingdoms, each with its paramount chief. The Malaprusi chief is the Niyiri and is much honored and venerated by Malaprusis as well as the three other “gates” of the former empire. In turn, Malapruli princes have spawned other kingdoms further west. The Nyiri’s real powers, however, have been limited to judicial decisions since the coming of the republic in 1957. It is not really an inherited post, yet there has been no sanguinary conflicts to gain the paramount chiefdomship. Candidates must have a paramount chief as a father (not a unique distinction, he has 12 wives) but then must have gone through a rigorous tutelage of being a sub-chief of one flavor or another inside the larger kingdom, before he might claim the “lion skin” upon which rests his throne in his palace in Nalerigu. One requirement is that the candidate must be able to recite his lineage back seventeen generations to Na Atabia and the “red hunter.

At any rate, Na Atabia was anxious to encourage trade (Slaves mostly sold for gold by Muslim traders) from Toga to Gambaga (just down the road a bit). Predation upon caravans was getting irksome and the fortification was erected to house warriors and, not surprisingly, tax collectors. The ruins remain.

I start at 2:30, when the town is beginning to stir after avoiding the hottest time of the day from 11AM on (98 degrees by 10 AM, actual measurement). The sounds heard while walking through town are an experience: a cover of Bob Marley’s “Buffalo Soldiers” sung in Arabic, harpsicord music, Ghanaian patriotic songs, family arguments and “Frosty the Snowman.” Children and younger men and women try out their limited English (the official language, Ghana has a couple dozen languages but no one understands them all) on the funny white man.

If anyone passes close it is important to acknowledge them with a greeting. The response to any greeting is “N-aaah” which mostly means “I acknowledge your greeting.” Dodging leaky and, at times, truculent goats, the odd pig, chickens, motorcycles and motorcycle-energized two-wheel carts takes a certain dedication of purpose. I pass three mosques and three churches. The smells of the town waft back and forth: grilling meat, wood smoke, fetid aromas, dust, humanity, and gasoline. Most of the commerce is motorcycle carts selling 50 gallon drums of water as well as the ubiquitous plastic water packets containing about 8 oz. of filtered water. The discarded packets for Bisvel Water are everywhere. I am able to get up to the Via Gambaga within 25 minutes and know to turn west on the road to get to the reservoir. This affair is probably 20 acres and about 6-10 feet deep. You do not drink from it. Potable water is Bisvel Water or wells, some dug by my friend Tommy (see a Day with Tommy in this blog).

Once I get within range of the reservoir, I find a way to cross the small outflow downstream from the earthen dam without confronting some pigs, hock deep in the mud and looking proprietary about it. I have no idea where “The Wall” it is except “near the reservoir.” I start to circle the lake, about a three mile circuit. Luckily within about a half mile I find the best preserved specimen (pictured). The highest segments are only about 7 feet high but the plan is massive.

The wall is made of an odd concrete-like adobe made in a huge circle. It was constructed using slave labor to safeguard the slave trade. At the time of its construction, Queen Ann was ruler of America. America was three generations from its conception. Ghana was old even then, old and civilized and it had been for a millennium.

I came back through town on a parallel road, passed the Niyiri’s digs, very impressive in a concrete and steel sort of way and stopped near the (Bus) Station because my purpose-bought phone would not recognize the sim card I bought for it just last week. The Vodaphone shop was nearly empty this late in the day (5:30 PM) and the young proprietor motioned me forward almost immediately. I showed him the “no SIM card” warning and he opened up the back, turned the card over and gave me a long hard look before he closed things up again. All fixed. He refused to take any money. I wish he had not.