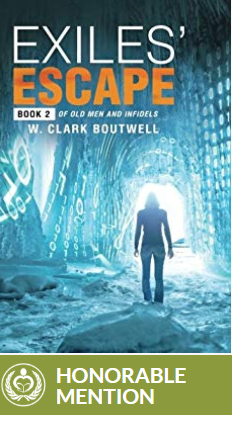 [Following is a volunteer review of "Exiles' Escape" by W. Clark Boutwell.]

Exiles’ Escape is the second book in the series "Old Men and Infidels" by W. Clark Boutwell and picks up directly after the events that conclude the first book, telling the story from the point of view of different characters. I haven’t read the first book but it wasn’t hard for me to pick up the storyline. This brings me to say that although the events of the first book form a fundamental part of the plot, reading Exiles’ Escape first should not be a problem.

The story begins with eighteen-year-old Malila Chiu, who, after faking her own suicide, embarks on a perilous journey to escape the Unity. When General Jourdaine is brought the news of Malila’s death, he becomes suspicious of the alleged event and begins a frantic pursuit of her. At the same time, military Jesse Johnstone sets off in an airship in his quest to find Malila, with whom he became acquainted in the first book, all the time whilst doing his best to avoid the various people intent on killing him. Malila might have a lot of people searching for her, but she doesn’t make finding her an easy task for them by any means, fleeing via the underground beltway system of twenty-second century America.

For me, the high-quality dialogue really stood out. Not only was it fast-paced and kept me on my toes, but it was also witty and funny. The standard of the dialogue in a novel is very important to me, and I am pleased to say that Exiles’ Escape did not disappoint. Another thing I liked was how neatly everything was wrapped up by the end of the book. It was very satisfying to see how all the seemingly independent events that happened throughout the story clicked into place during the final chapters.

There was only one thing I would criticise about this book. Throughout the story, I would have liked more focus on Malila who to me was the most important and interesting character of all. That said, I hope to see more of her in the third book of the series, which I will definitely be reading soon.

I didn’t come across any spelling or grammatical errors, and this, coupled with the ease with which the book can be read gives the impression that it was professionally edited. I give this book a rating of 4 out of 4 stars; it’s an amazing novel that I was sad to see come to an end, and, as I mentioned before, I can’t wait to read the next book in the series. I strongly recommend this read to science fiction lovers, especially to those who are interested in politics. There is a small sexual assault scene, and although it isn't explicit, I wouldn't recommend this book to younger audiences.