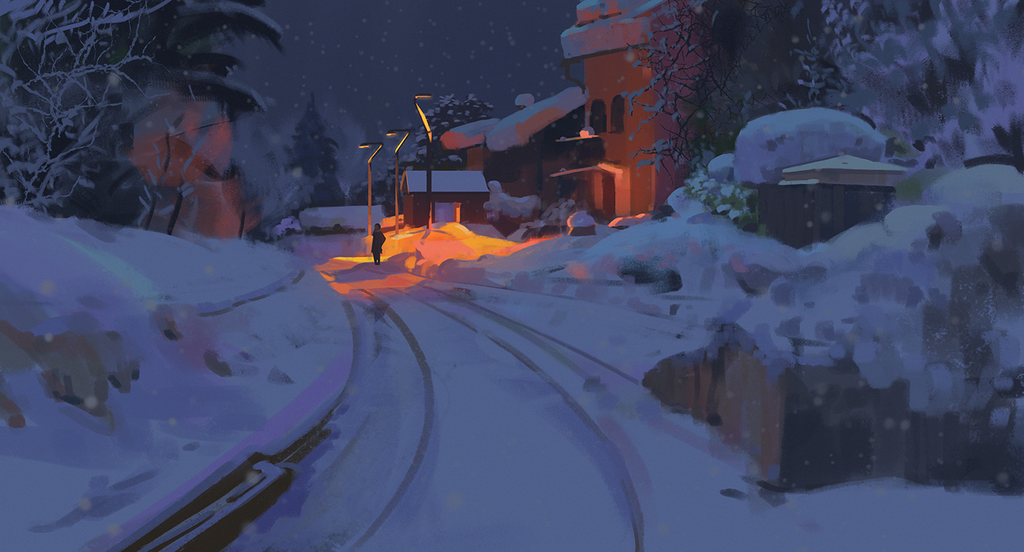 Minute scintillations crossed the silvered sheets of winded snow,
As watered winter’s sun did cast a gleam of distant, falling glow.
And hissing down to join the drifts, the susurrating mites of ice,
With pale blue capes and copes and crowns, clothed the rocks and trail and trees.

My tread was deep upon the trail,
The sound but lost within the hiss.
Indeed, my boots were lost, almost,
Within that blanket-covered place.

Standing amongst the swirling points,
Of blowing ice that stung my face;
I sought a way that once I knew,
When Spring had come but freshly new,
The wood and trail around me lay,
In spring, was warm and welcomed fair,
But now it seemed an alien’s place,
Of white and black—defeat’s disgrace.

Of Cold, ‘til then, I scarce had note; the work of boots in snow is hard.
But standing in the swirling ice of setting sun at close of day,
I felt the Cold invade my mind with dread of loss and life’s decay.
Alone in cold and dark and snow, without an end to trail in sight,
Nor way to go, now lost in time, to warm the heart amidst the bite,
Of age and loss in Man’s cramped scope against the careless years,
—I feared.

(The poorest purchase yet, for fearful Minds on perils’ slope,
let slip the lessons learned in youth to squander Will and Trust and Hope).

With me, the Fear did argue hard to stay and rest, nor brave the drifts,
And risk the trail which wound beyond and edged the drop among the cliffs.
A slip—a fall—and terror looms from unseen sintered stones below,
To fall unseen, unfound, alone—attended only by the Cold,
There to glean the last of rebel heat against the Lords of Dark.
So, there I stooped in blackened wood and felt my ice-infected mind,
But fear me to the spot I stood, ‘til wind and snow would stay and bind.

The Youth, whose step was silent, came,
(As, I am sure, my own had been),
And thus it was I saw him close enough to touch, before I learned,
Another soul did walk amongst the snow and blackened trees.

His face, I saw but in a flash, did seem familiar, strangely so,
And young, he seemed, as once I was, when I was deathless, that to say,
That any death, then, I might choose, to me, no doubt, was grand,
And noble, earth-beshifting sad—
And doubtless cause a loud lament,
From lasses I had not yet met!

The Youth was poorly shod and dressed in thin and sodden, mended coat,
A sea coat, worn but mended well, as once had I when young and poor.
His hat, I saw it pulled right down to cover ears from snow and wind,
T’was black but with a frosting yet: a watch cap covered wet with snow.
So close was he, I barely raised my voice to him. I said “Hallo,”
(My speech was not informed by wit).

Says he to me “G’evenin’ sir,” and made to walk the trail beyond.
I stopped him with a touch upon his coat, and felt him shiver—once.
“Perhaps and do you know the trail to Shiloh Station or thereabouts?”
“Of course”, he says “Just follow me,” then laughing, turned at once and left.
I lurched then on my feet and stepped upon the trail, cold-clumsy—stiff.
To wend a way that once I knew,
When spring had come but freshly new.

The Youth, his hands in pockets kept,
And walked away, not looking back.
And soon I lost him in the gloom, the Youth who found me, then my guide.
“He must be cold or late for meat,” thought I, as trudging on I found,
His footsteps in the drifts of snow already filling up with ice.
Yet leaving the black enbranch’ed wood, obscured within the midst of night,
I ‘scaped the trap that Fear had set to follow faint-lit forms at night.

Still stumbling on the hidden rocks beneath the blanket, white with snow,
I learned to place my feet within his mark of boots, but followed slow.
The Edge I found when walking thus, so carefully, just looking down,
As coming to a great dark hall, where echoes lose reflected sound.

And Wind, now doubling its resolve,
To stop my progress, there to stay,
Did bid me to my shabby knees,
Upon the trail beside the cliffs.

With shards of ice, the Wind assailed,
And flayed my eyes if long I looked,
To see the prints, each fainter yet,
In light of sullen, scudding sky.

I crawled along from print to print,
Amidst the torrent’s wind and ice,
And thought the Youth had been remiss,
In leaving me to fend alone,
To show me weak where he was strong.

Yet Cold, who had just let me slip but through her fingers in the wood,
Quite hurried up the trail to me, lest I should miss her—company.
My hands and feet again felt cold. My mind was touched again, I think,
As Cold approached and ‘came more bold to ask me why I did not quit.

“Can it be you think some soul is there at home to mark you gone?
And would be waiting up the night if you went missing from her care?
Or is there son or daughter fair, who think of you as wise and good,
To weep upon your funeral byre, forsaking rest and daily food?
In sorrow at your passing light,
In sorrow for your passing light?"

And on she went to ask some more, (for Cold now warming to her task),
“Is there some exalted work that only you alone must do?
And Is it true you think you add a single thing throughout your life,
That could not be supplied—in bulk—without so much as undue strife?”
In turn, could I not answer her, ‘though wishing that I could say “Yes!”
Instead, I knew the truth of things, and welcomed Cold’s investing arms,
To lie there crying—freezing—tears.

While Cold and I there did embrace,
The Youth returned to stand in place,
Awaiting me, he seemed to be,
Until I onward rose again.

I did not hear his tread, once more, but noticed boots before my face,
As waking from a Sunday’s nap, and thought awhile before I placed,
The meaning of these scuffed old boots, until the Youth, no doubt from cold,
Did stamp them on the ice and snow.

I roused then, coming to myself. “Get up now, sir. No time to rest,”
Says he to help me to my feet, ‘fore turning once again. He left.
His walking through the frigid drifts, let Wind pick up the ice and snow,
His boots had kicked up as he went, and blow them down the wind to me,
So shutting off again my sight,
With tears on tears, I cried that night.

Leaning over, hunched and stiff, each step of mine I had to place,
As if a child whose treasures, found, he lines up one by one in rows.
But unlike little boys in spring, my treasured steps in rows were not,
But wandered right and left as Wind and Cold and Age, allowed.
Again, I lost him in the gloom,
And once again I struggled on.

The Edge that feared me somewhere lay, I thought, should be then to my right,
As thence the torrent’s wind did blow and memories saved from brighter times,
Of years ago, I walked these woods, before I knew a man’s dismay,
At seeing what he thought was good be lost because his grip was weak.

But in the black and fierce‘d tide of Wind and ice that blinded me,
My boot tripped up upon a rock to make me run to keep my feet,
Then blew me forward, in the dark
to…
fall…

Winded ice now blows unchecked,
By one small broken, huddled form;
Swept clean is now the sintered Edge,
From alien intruder of the storm.
The Wind, it knows not to exalt,
To free itself from one mere man,
Yet scours long the icêd-ledge,
Erasing from its silver crust,
The impudent, faint scars of boots,
And fainted slur of agȇd step.
Blithe to fate, the icy Wind,
Shrieks the halls of stone and dark,
For one small ever-frailing form,
Was never more than briefest glow,
Of heat within the heart of snow.

I fell—I do not know how far—and lost myself to ken and sense,
And Cold, who had of course, again, not blaming me for leaving her,
Embraced my limbs and mind once more,
Stretching forth to seize my core,
Below the lip, along the Edge,
Upon the cliffs I feared to tread.

And when I came again to rights,
The Youth once more to me had come,
For he (regardless of my faltered sight),
Was never far from me all night.

He found the branch, which saved my life, although it had required pay,
And took an offering of blood, of mine, from wounds which wounding, save.
And lifting me so legs might gain a purchase on the slippery rock,
We side by side, the cliffside climbed, out the cleft, to spite the grave.

Emerging from the stony crack, I huddled down to ‘gain my breath,
A minute thence, I was alone, my Youth abandoning me once more.
This time, however, I could see dark trees ahead along the trail,
Sheltering from the frigid blast, were free of Wind’s tormented wrath.

The Edge behind me, entered I another wood as black as one,
Had trapped me for a time with Cold, when Fear to me had counseled that.
Yet, the Wind now pressed my back to haste and hurry me along,
And sheltering somewhat, in the pines, the footsteps of my guide led on.

The steps led down along a ridge,
Beside a brook that followed close,
To then a road, and down again,
To Station Place in Shiloh town,
To find once more both warmth and life.

And after shucking gloves and boots,
And sodden socks, and coat, and cap,

I waited midst the steaming clothes,
To use the ticket I had bought,

Upon the last train, ‘fore it left.

Glad again to be alive, despite the likelihood of loss,
Back from death in blackened woods, through Wind’s torment and Cold’s embrace,
I wake to feel a Spring’s new dawn, and rise to walk among the trees,
To see the wood that once was black,
Alive with flowers’ fragrant dance.

And glad again to be alive, to turn my hand to things of need,
To do what little I can do to keep a span of light about,
This corner of the world I know and garner what affection’s there,
From lovers, lost, and children, gone,
To other loves and lives, their own.

And glad again to be alive, ‘though age advance and youth retreat,
And this machine in which I live then frails enough to let me lapse,
The lease and leave, to find a place, some airy digs, and moving thence,
Along a warm and sunny trace, whose Landlord’s built and kept the day,
To Live a life both “Further in” and “Farther up,” as Jack would say.

My guide I never met again.
That night did never once he show,
Unless you count that looking through,
Pictures sent me from an aunt,
More aged than I when Death she met,
I found an old and faded print.
With sea coat, watch cap, scruffy boots,
From off the page, the Youth gazed out.
On back of this discolored scrap, was written in her scrawling script,
My name and year in distant past, and “Shiloh Station” was all there writ.