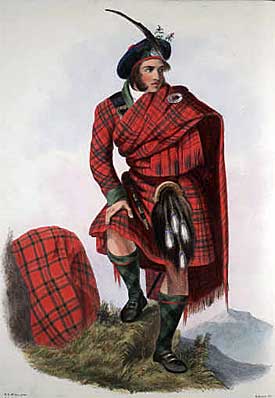 While rustic, wrothy reckless Scots
Reviewed from crags the glistening tarns,
Amid the gales and gusts of yore,
You can believe their knees were sore.

The warmest hose which have not trod
Through bog or kyll to martial tune,
But else have kept to road and brig,
Still lack a certain latitude
And choose to venture not above
The Tropic of the Fatted Calf.

In liked manner woolen twill
Of partied-colored, tartan pleats
Many a highland lad does gird
However, dares not to descend,
In fear lest it be called a Skirt!

Bereft of covering, there to lurk,
This most of all neglected joints,
By Winters’ hard eternal work
The knee is redden, roughed and rouged.

No doubt the Scots’ renown’ed scowl
Of dour men, of mien and brow,
Is due to knees, in part or whole,
Which lack some lotion to console.

[written for Joseph H Boutwell in a gift of a kilt, his first]