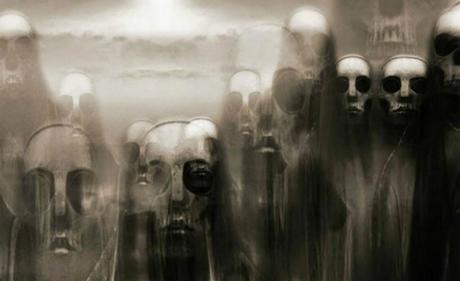 There are ghosts on Planet Elsinore. It was a fact that none of the earth colonists doubted.

Only after the huge cryo-ships had defrosted the earthlings and, in turn, been cannibalized into factories and homes did the new colonists learn that the prior occupants of Elsinore had never left—not really.

However, there was no going back to Earth.

The colonists had only just made it away at the start of their long cold trip, the winds on Earth well over 200 kph by the time they had broken through the dirty green clouds into space. Cryo-suspension of the entire colony ships' companies took time. Those who waited their turn watched in horror as their birth planet roiled in the maelstrom of seething unnatural vapors and billowing exhausts from pole to pole beneath them. Earth and its trillions were still dying when the AIs took the Argo and her sister ship, the Naglfar, out of orbit. Now, Sol was an unremarkable yellow star in the constellation of Sagittarius.

The ghosts had discovered the earthlings shortly after landing, coming more and more thickly each night. Unnamed terror filled people's hearts once the solitary red eye of Kepler-1649 slipped below the horizon each prolonged night. Moans, rattlings, and groans of the dead resounded through the makeshift homes of the newcomers. Chairs moved, dogs barked, and food spoiled. Sleep was hostage to the wails of the prior inhabitants of Elsinore.

Of course, Jacob had grown up with the spooks, among the first generation born after touchdown. He knew no other reality than the vaporous writhing lights that circled his crib once the lights went out. He called his familiars Doggie, Kitty, and Frank after he heard his father suggest to another group elder that they should "Be Frank." His chubby hands would swirl through the spiraling and keening vapors, giving him an odd feeling. They must not have liked that, as the spectres subsequently haunted him from a distance.

His father, seeing the reaction, developed the Little Hero, which the machine shop rapidly copied for distribution. The small box created hypersonic sound and ultraviolet waves at random intervals within any space. The colony slept soundly thereafter.

It was an unsteady truce until that fateful day trip. Jacob, now a head-strong and adventuresome boy of six Elsinore years, found himself trapped by foul weather on coming back from a solo hike to Surveyor's Point. Unperturbed, he hoisted a poncho as a bivouac, ate his rations, and drank the melted snow, expecting to arrive home before his work shift the next day.

The ghosts came for him, flickering, swirling—keening their pain into the night.

Sleep was impossible. "What do you want of me?" Jacob finally said in frustration to the moaning darkness.

And they told him.

They, the colonists and the Eldritch, came to a modus vivendi in the end. The colony surrendered its Little Heroes, moved a few buildings, and canceled the graveyard shift. In turn, the old ones told their tales.

"Blenpharofer, honored of the Old Ones, could you fetch me the small Phillips head screwdriver with the yellow handle in the top drawer of my toolbox?" said Jacob, half-engulfed by the crawler he was repairing. Putting a hand back, he felt the tool gently placed into it for immediate use."

Jacob sighed. "No. This is a straight blade—the Phillips head, Honored Old One."

That's when the howling really started anew, chilling his blood and making his palms grease with sweat. The Old Ones could be such babies; he thought you need guts and glands to mature properly.

I do not believe in ghosts, at least human ones, leaving the possibility of the Creator free range for the rest of creation. It is given for man one to die, and then the judgment. However, when challenged to to an ultra-short story, I thought I would have fun with it. Here is my best effort.