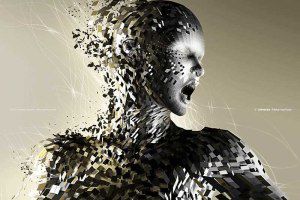 Could the Unity not do something to make reincorporation less disconcerting?

It was always the same when she reincorporated; her disembodied flesh sensed the trials her mind had endured … and suffered in her absence. It hardly seemed fair.

Edie clucked at her as Malila groaned and sat up.

Don’t be vulgar, squilch! You brought this on yourself, you know.

The obscenity was meant to shock, and, on cue, Edie grew silent. Growing up in the crèche and then the Democratic Unity Forces for Security (DUFS) barracks, Malila possessed a flamboyant repertoire of profanity, vulgarities, and obscenities. Her metaphract, of late, had taken a dim view of this proficiency.

Lieutenant Chiu donned the light robe she had laid aside hours before and, shivering, waited for her heart rate to glissade from the heights of conquest. A trickle of sweat worked its way through her short, military-style haircut and down her neck as she took a large breath to steady herself.

You’re going to be late, squilch.

Give me a break, Edie. I just fought a battle … two battles … to the death.

That’s nice. Your appointment is in two hours and twenty minutes. You smell bad.

Malila rolled her eyes. No one was a hero to her frak.

[1] Tell me when the comm’nets announce my whale hunt.

Of course, Lieutenant Chiu. On an unrelated topic, we are getting full of ourselves—are we not, squilch?

Don’t call me a squilch, frak.

Malila thrust a gesture, equivalent to a small child with a wetly extended tongue, in the mental direction of her tormentor.

All right, metaphract, have it your own way.

You have received a number of offers on methods to improve pleasure-sex, another dozen offering to contact your spirit guide in the multiverse of your choice, one from a foundation requesting funds to combat the heartbreak of facial hair, and a message from Command Outland Signals.

I’m not going to deal with that now. Show me some music.

The Femtosense Grunge Philharmonic selection that Edie chose swelled within her. Malila experienced it in all her senses, feeling a breeze and receiving the sharp taste of spring rain. The music played upon her emotions, and she abandoned her will to its wanderings. Perceptions, which Malila interpreted as being “outside,” slid over the input of her eyes, ears, and other senses. These were a level “above” what she detected with her corporal body.

Metaphracts like Edie originated as interpreters of the interface for those receiving the O-A brain implants as children. Most of the boys taught their metaphracts to play tricks on one another and discarded them with puberty. Most of the girls decorated them with childish fashions, retaining them after puberty but keeping them unused in their mental closets. Malila had been unusual in embellishing hers with wit, a face, and a personality … or at least as much as a Turing Metaphract could imitate. Edie was, for Malila, a convenient construct of the CORE interface, coming when she called and doing the scut work of daily life.

In contrast to the metaphract, her O-A was a constant presence … with the constant potential danger of slipping across and becoming lost to reality. Malila had been taught to fear this fate. Those who ignored the warning suffered a living perdition. The first few victims had been immediately prohibited an interface with the CORE and had erupted in bloody rage. Thereafter the COREd-out had been left to dwindle away, lost both to the Unity and to their own shriveling personalities.

Perhaps it was just a tale, but some truth was embedded in it. The CORE interface was seductive. Once, when Malila had gotten too close, warning lights, a vile shade of green, had strobed across her inner eye. Now she only looked in that direction from the corner of her mind when she felt secure. Most feared to look at all.

A claxon sounded inside her head.

Malila scampered across her room, shedding the robe as she went, knowing the chamber would retrieve it and sort it into the appropriate category: bureau drawer, closet hangers, or laundry chute. Malila stepped into her bathroom and , or accessed the CORE, with a few taps with her O-A. The room warmed and misted to her specifications.

Within the hour, Lieutenant Chiu was dressed in the uniform of the DUFS: form-fitting black Produra cloth with the subdued holographic markings of her rank on her shoulders. This sleek envelope, surmounted by a black helmet covering most of her features, made her anonymous in the crowded streets of the Unity. Malila was ready to meet her friends for lunch.

Once on the street, Malila stepped onto the descending beltway and after a few minutes navigated to the express belt “For S24 and Above Only!” Malila’s specialist level, her rank within the Unity, was just high enough for her to use the belt.

Detecting Malila’s presence, the beltway comm’nets blossomed with a weltering array of advertisements, PSAs, and lepto-mercials of numerous flavors. Malila ignored them as much as she could, seldom finding the enthusiasm for anything other than a few sporting spectacles, like her beloved kirshing; the daily melodrama of politics; and especially the news.

At that moment the news was showing two people, a man and a woman, both handcuffed, being led to a waiting DUFS skimmer.

This fascination with news borders upon the macabre, Malila.

Nonsense, I’m being a good citizen. Does it occur to you that they brought it on themselves?

You think they brought that on themselves?

Bruises marked the prisoners’ thin bodies. The woman’s dress fell around her waist as she walked. The assembled crowd laughed at her attempt to cover herself.

They must have tried to resist arrest, frak. They were running an illegal phantom shop, after all.

One you have used yourself!

Edie, don’t be difficult! Here come the policoms,[2] I need to see these.

Major political analysts numbered about a dozen, and the long-time leader of the pack was James J. Gordon. He possessed an uncanny ability to ferret out scandal, hypocrisy, and political disloyalty in its many forms, using the flensing knives of parody, innuendo, and sophistry for the loyal citizenry.

Best to keep your head down around here with people like Gordon about.

That could be construed as a disloyal statement, frak.

Then it is you that should worry, isn’t it, squilch? I am but your humble servant, nothing more than your own program, am I not?

So when does the humble thing kick in?

I’m assertive only in your best interests, Lieutenant. Allow me to mention again that your messages await your attention.

Malila took an ascender and emerged immediately in front of the People’s Museum of Natural History. A huge banner proclaiming “Triumph of the Will” emblazoned the entrance in the state colors of red, white, and black.

As she entered, Malila looked up, as she did on most visits, to the three pale-blond stony depressions, surrounded by darker stone, far over her head.

I wonder why they chiseled them out in the first place, Malila. What could have been so obscene or seditious that they had to deface the whole building?

There you go again, getting us into trouble, frak.

No, I’m not! It was an honest question. For all I know it was done by the Sisis.

The possibility that senile senior citizens, those who no longer contributed, had once more conspired to injure her homeland was distressing.

The wisdom of the Unity in retiring the elderly had been proven out time and again. Once removed from society, the role of the aged in past mistakes became evident. Even now, the practice of compassionate retirement ensured new ideas and new vigor came daily to the forefront of national life. Young and vital citizens had nothing to hinder them in their rise to greatness. In the past, it had taken decades of public service before younger leaders could ascend to their rightful level of responsibility. But now, citizens could assure their ascendancy if they were able to arouse the ardor of the citizens and were able to formulate most adroitly the aspirations of the state.

Malila brushed past the guards and into the lobby.

[1] “The proper way to give a command to your new Turing Metaphract (ED v3.94) is always to begin on a new line. Announce to the ED that this is a command by the use of ‘,’ and then give the desired command. Lines that do not begin this way will not be taken as commands, although, in time, your ED may act on them once it gets used to you. You can guess the effect of your comments and commands by the ‘verbals’ you get from your ED, a new and exciting feature of Turing Metaphracts. Your ED will gradually learn how you speak mentally and will pick up your personal habits. This comes with time and practice. Don’t be disappointed if your ED finds it too hard at first.” Concepts of Reality Engineering Inc., Beginner’s Guide for the Turing Metaphract (Education Device [ED] v3.94) (Passaic: COREprint, AU 64), 4.