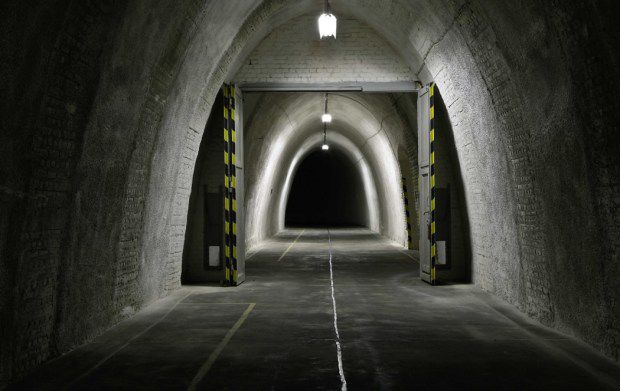 The blackened door lay several meters from the portal, the rebar bent like grotesque writhing snakes.

“Sergeant Nelson, is the station secured? Any explosive devices?” Malila voiced into her headset.

“Meet me at the entrance and keep a list of tasks.”

Nelson could at least act as a scribe. Most CRNAs could hardly talk.

Nelson and she strode through the base, which extended three floors below the hulking mass of the entrance. The first floor was all equipment and vandalized as expected. On the second floor, they passed through the landing into another room, crunching glass underfoot.

Malila examined briefly the damp feral sock that lurked in the washbasin.

“The colony is coming,” in red dribbled paint, decorated the back wall. It surprised her. She had been unaware the outlanders had the written word.

“Sergeant, have this room cleaned; repaint these quarters.”

Malila was beginning to feel that her world was becoming understandable … until she started down to the men’s barracks on the lowest floor. A dark and foreboding pool of fetid water opened at her feet.

“Sergeant, the men will bivouac outside until we get their quarters pumped dry. Do we have cover for them? What is the weather forecast?”

By the time she finished the inspection, Nelson had a long list of menial jobs for the men. Malila sent him to organize the perimeter.

It would take days to pump the station dry, bring the computers online, reestablish the network, and finally synchronize the signals with headquarters. The actual work was hers; CRNAs were only her bodyguard, nothing more.

Malila began work on the pumps, emerging an hour later dirty and wet after crawling around service conduits and rewiring the connection through the panel. She would be listening to the pump’s low rumble for most of the next two days.

The weather was good for autumn, and the men would be comfortable outside. She was just as glad. CRNAs always made their quarters smell foul after a few hours. As a cadet, she had called them “the rank and vile.” Malila smiled.

Other than the intermittent sound of pulse fire, the rest of the travel-shortened first day was uneventful. Malila guessed there would be an abrupt decline in the local rodent population. The judgment of the CRNAs was poor. The rifles were locked to the platoon by fingerprint readers on the triggers and ID chips embedded in the base of the thumb. It kept them from losing them. They even had the antifratricide subroutine to keep the men from firing at each other by mistake.

CRNAs were the bone and muscle of the DUFS. They were hardy, loyal, and dumb as a sack of hammers, but they fired quickly and accurately and took staggering losses before losing combat integrity. The use of their bodies, absent the higher functions, was the price the Unity had prescribed for their crimes. Lieutenant Chiu climbed up to the destroyed portal.

“Feed the men, and set a perimeter and watch schedule. Reveille at 0600.”

She felt better when she was issuing commands.

Her quarters were now clean, and the plumbing worked. She ate some rations, showered, threw herself onto the cot, took her ThiZ, and was asleep almost immediately.

The first night was quiet, but, fatigued as she was, Malila did not sleep well. She had her dream, waking her in the darkness with its usual panic. Once awake she could not sleep.

All her hopes balanced at some point in the future. Strangely she missed Edie. Malila had created Edie—well, had designed the accent, the speech, the subroutines, and the commands—and yet she missed her. The useless O-A hummed in her head.

She finally got up at 0200 and walked along the picket line. She found the CRNAs’ brisk challenges reassuring. She returned to her bed an hour later and was able to drop off again with the monotonous hum of the pumps sounding like a huddle of distant voices.

She awoke still grumpy and a bit dazed. Even the CRNAs were having trouble getting started in the cold morning air. It took repeated orders to get them to respond. With luck, she thought, the men would be under cover tomorrow.

Despite her weariness, Malila set to her task with eagerness. Her path to rejoin the DUFS, reenter the Unity, and retrieve her career led through the dank and dimly lit corridors of Sunprairie. In a way, she found it a pleasure to fall back onto her skills as a warrant officer, doing her own work and depending on her own computations. She spent the day fixing one problem only to find another that had been undiscoverable until she had fixed the first.

Every few hours she went to the surface to give a new task to Sergeant Nelson and the CRNAs.

She worked through the afternoon and into the evening before she caught herself nodding. Then she ordered Nelson to wake her at 0530, took her usual hit of ThiZ, stripped down to her skivvies, ate some rations, and threw herself onto the bunk in a haze of exhaustion.

She slept well until, hours later, she awoke in the dark with a hand over her mouth and a knife to her throat.

“Don’t move, lass,” hissed a voice. The hand moved enough for her to breathe, if just barely. She heard the muffled sounds of what might be commands, several loud reports, and then single shots at longer intervals. After the first few, Malila counted thirty-seven shots fired. She felt a jab in her thigh and then nothing