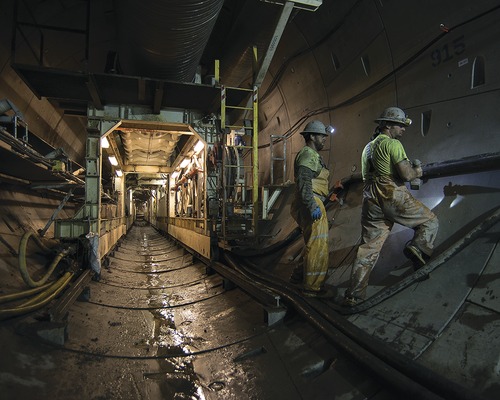 Malila saw the checkpoint in the distance. It was unannounced. They never were. A squad or two would descend on an anonymous stretch of beltway and set up shop, checking the papers of everyone going that direction. She had done it herself. Malila watched the phantom shops evaporate around her like some form of undersea anemone; one moment they had blossomed with posters and sale racks the next they were an idle collection of strangers carrying odd assortments of ladders, suitcases and umbrellas.

Malila had been free (or was it bereft?) of any sort of interface for almost twenty-four hours. Her head throbbed and her nose had burst forth with new contributions of blood to add to her disguise twice in her journey, so far. She had lost count of the times she had summoned Edie, only to feel the aching hollow of loss with each attempt. But there were pleasant surprises as well. Escaping the Filadelfya sector had been easier than she had first thought. She had just followed the Market-belt west and taken the Skoolkill belt south through the tunnels. No one remarked a half-naked woman with decorative handprints in dried blood over her belly and face.

It was only after she got beyond the suburbans that she realized she had made her decision, even without thinking about it. She had tacitly and irreversibly set herself on a course that could end in her death, her being Sapped or her escape from the Unity.

She was no longer dodging the illusion of the CORE-sim and its traps. She was in full rebellion against all that she had once cherished. She would now be the hated enemy of the Unity. If she succeeded in her escape she would graduate to become a savage outlander. If she failed she would be manure for the Unity’s fields or a temporary, mindlessly cooperative soldier for the Unity. And she had chosen her route badly.

The belts were for commuters. Only by happenstance did the spider-web of one city’s beltways connect to the next city’s beltway, creating chokepoints where a clever pursuer could catch her with little difficulty. She was beyond the metro Washenton area, now … and trapped.

Malila got off the beltway almost without thinking, arriving onto the platform of Anne Arundel Annex. The platform was typical: public objects d’art were placed to relieve the monotony of the long low gray concrete tubes. Art failed, monotomy won. This blocky affair done in welded steel and painted grey and green, needing several hundred words to explain it was supposed to be a sunrise. Malila stopped to examine it as she thought of her options.

She could only loiter here so long. There was scant reason for anyone, abstract art notwithstanding, to be on the platform. A lingering citizen in a soulless hole in the ground was too obvious a sign of bad intentions. By now, without doubt, DUFS units covered all the exits. Looking around, Malila saw a door proclaiming “Authorized Personnel Only” and walked purposefully to it. Stealth or indecision would attract attention by the surveillance cams. She had not been able to see any. That worried her.

To her surprise the handle turned easily and she passed into a short sterile corridor that smelled of hot oil and old urine. It led to a long flight of stairs, the bottom lost in darkness and the sound of hurtling machinery. Not hesitating, Malila descended.

Stumbling at the bottom in the dark, she caught herself without touching a wall. An unannealed cacophony of machinery assaulted her ears while the sound of rollers close overhead provided a descant of sibilance as unending as the beltway itself. The surge of the flux motors, in turn, provided a rumbling base note. Within the racket, Malila heard voices. She supposed that the beltway, for all its sophistication was still a machine and that presupposed the existence of mechanics. The dim light brightened as she waited, showing her to be at a crosswalk. Aisles stretched out in three directions from her location.Malila continued foreward, in the same direction as the stair, hopefully nearing a service exit or utility shaft. The clangor gradually receeded. Here gently humming panels lined the aisle,on either side. Within thirty meters, however, and without crossing another aisle, her path dead-ended into a translucent screen. She heard soft scratchy footsteps…several sets of footsteps, behind her. As she turned, the noises stopped.

Malila could see a huddle of forms at the very reaches of her sight. Out of the gloom a shape edged closer. Malila began to make out strange faces: small, squinting eyes, long prominent ears, thin mouths and protruding faces with almost no chin at all, pale narrow faces. The half-dozen figures approaching her all wore the same smock-like shapelss garment with a wide fabric belt from which dangled tools of some sort. The garments fell to about ten centimeters above the concrete floor,with trousers of the same material ending in neat cuffs. Narrow feet inside rough sandals scratched along the uneven surface as the group approached.

Finally, one stepped forward, circling a pair of goggles nervously like a petitioner before a magistrate.

“And is the lady come from above, here to do us good or harm?” the apparition said finally.

Seemingly out of place in the whirling, oiled darkness, the voice was musical, reminding her of the lullabies of Sally. The sudden cessation of the ever-circling goggles, jogged her back to the moment.

“Who are you? No, I don’t mean you any harm.” Malila blurted out and was almost ashamed of her voice, a croak in comparison to her interrogator.

There was a scritting conversation before one of the other pale faces stepped forward and whispered into the speaker’s long ear. The speaker nodded and replied to her.

“Nor is it apt for stranger here to ask us who we are. Do tell us first who comes within of who and what you are.”

This time, the melodious words brought a chirping buzz from the individuals behind the speaker, sounding like approval. She noticed that one or another carried a wrench or other small tool. They did not carry them as she would. These people were no warriors even as she realized she was unarmed, alone and nearly naked. She could no longer breathe through her nose because of the swelling. She had not eaten in over a day. Any fight would be a short one.

The DUFS roadblock on the beltway above might mean that her ruse had failed and she was the object of a manhunt. ‘Every act is a wager.”

“My name is Malila and I’m not here to hurt anyone. Some people are hunting me and I’m trying to escape.”

Initially there was a look of distaste on the faces of the group; it was nothing overt but just a looking away from her for a few moments. Malila again heard voices as the several heads bobbed and nodded in conference.

Malila’s, much more familiar with barracks limericks and ballads, when the strange speaker started again, found herself framing his words as if a poem.

“We are the people of the dark, the poets of the gloom.

Our work is on the belted way; our pleasure is our wording.

The Unity is far and near, but not below the streets, as here.

Unknown to us, the name you give; a traveler no doubt you be,

So welcome here is granted you, by Iain to forswear.

Come follow us to Iain’s place, the best to treat and feed you.

We give you leave to follow close, but none to wander freely.”

He again began to circle his goggles before stopping self-consciously and placing them over his eyes. Turning, as his fellow workers encouraged him with friendly pats and low whistles, he moved off down the aisle. Two larger members of the group pressed against the wall, while the other members of the group dispersed, apparently back to their duties. Malila followed the speaker, and as she passed, the two waiting members of the group fell into position behind her. The shuffle of their sandals echoed into the dark alleys as they passed, returning as echoes to all her fears.