Excerpts from Silence and the Gods

Home  ›  Excerpts  ›  Excerpt from The Silence and the Gods: Javalina's Dream

Excerpt from The Silence and the Gods: Javalina's Dream

The Silence and the Gods Excerpts 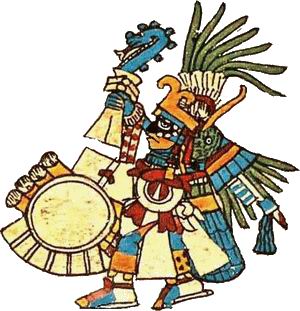 “The time is near. You know where I need to go, Ximena,” Javalina said before rolling up the window separating her from the driver's compartment. All the troops were in place and the fools in Santa Clarita, army headquarters, had congratulated her on being this year’s general to lead the assault on the Demarchian cow. None of the them, neither the fat burghers of the north, nor the grasping drugged out lords of the Durango capital, Nuevo Grenada, knew. Only Nuestra Señora knew. And she was on her way to find out for herself.

Within the hour the staff car was sliding through the streets of what had once been Glendale, its sidewalks chocked with vendors and blue with the smoke of charcoal and auto smoke. The town had been liberated from the gringos generations ago--little remained of the northerners stain. The car came to a stop in front of a small furniture store selling rattan chairs, electric lamps recycled from glass jars, toasters, and water heaters.

“Pick me up here, afterward,” Javalina said as she exited the staff car. Ximena nodded and moved off slowly, the street awash with small carts, barefoot children and dogs. Javalina entered the store and walked to the back with but a nod to the owner, slipped out the service entrance and climbed the fire-escape from the ally. She reentered the building on the third floor through a broken window into a short hallway, making her way to a heavily padlocked door. She unlocked it with a key on a braided hair cord about her neck and entered.

“Mi madre, he venido a tener sueños,”[1] she said to the empty room and heard an answering grunt from behind a beaded door-curtain. Javalina smiled.

It would take time for the curandera to make the sacred miklantika.[2] Then she would dream, would ascend on the arm of Nuestra Señora de la Santa Muerte, the protector of the people, to have audience with the old gods. The fools in Nuevo Grenada never understood that. They worshiped Señora, if they believed at all, because of the magic, ignorant of her true identity. Imagining her some sort of Santeria saint of the conqueror’s nailed god, Señora, mightiest because she held death in her hand, was the guardian set by the old gods. The old gods, conquered by steel, horses, gunpowder and disease, had taken their hands off a people too weak to defend them. They had retreated for a season leaving Señora to watch, to stand guard until the right time was accomplished.

The curandera, Anna, finally appeared from the back room with a tray. She was old, wizened like a dried apple, and wore a cheaply made but vividly colored huipi. A billowing stench of old urine, rot, and ozone following her into the room, once more making Javalina wonder whether the smell was that of the potions she concocted or merely the stink of old age.

On the tray was a twist of paper, a shallow bowel, a cruse of a dark liquid, and a lamp.

“Siéntate, niña,” said the crone, pulling a low stool to the three-legged table in the center of the room. Javalina sat, her knees nearly at her chest and watched the preparations, as the curador, mumbling furiously all the while, poured the hot thick syrupy liquid into the bowl. The smell of damp earth and corruption, like a newly owned grave filled the room. She then touched the paper, a twist of some discolored page with writing on it, to the flame. It sputtered into light, spitting and popping with green fire. She let it burn for a while before placing her forearm over it, gave a small groan of pain, and crushed the fire out on the bare flesh of her arm. Within seconds, the burn had created a blister on the thin skin. The old woman scraped the blister open and placed the fluid in the bowl, as well. The burned paper she picked up and chewed. White froth was oozing out at the edges of her mouth before she spat the wad into the shallow bowl. The scent of almond filled the room, as the curador swirled the now cloudy potion. The time was near.

Nuestra Señora, Mictlantecuhtli, goddess of the dead, used the lives of her people in her game. Xochipill, Five-Flower, forced the outcome on the throw of the dice in patolli. Men bet and played, won and lost, at the pleasure of the gods. However, Mictlantecuhtli’s patolli game was the world, the intersection of the divine and the mundane, the sacred and the profane. Men bet their lives and Mictlantecuhtli moved them around on the great unseen cross-shaped patolli board of the universe. And Mictlantecuhtli had chosen her to play.

Javalina took the bowl in both hands and drank it down as the thick liquid leeched at her teeth and fouled her tongue. She gagged, the stench pummeling her senses before she could reach the dregs.

Reassured she would not be disturbed, Javalina lay on a low pallet before sleep overtook her.

At first, all she was aware only of the rough texture of the blanket on which she lay. But shortly, Javalina realized she was floating, had been floating. Strange. Floating, a slow staccato floating, down the dark deadly river to the underworld, the birthplace of the cosmos. The darkness thickened and became palpable, difficult to breathe, stiflingly hot, and she could see nothing. She heard low murmurs in a language she did not understand and the clicking of dice. Gradually, the stuttering motion slowed and she could now move her head to see from whence the sounds came. In the darkness, suddenly swirls of deep color appeared, parting like a curtain to reveal a tableau, as if seen in a memory: two gods, seated,

She was no longer floating but now walking, that strange halting step you used in great ceremonies. She looked to her left and found Mictlantecuhtli at his side, leading her by the elbow. She was strangely relieved, despite the goddess appearance. Once human before being raised to a godhead, Mictlantecuhtli’s skeletal face, gaping jaws, and sagging breasts, were at least familiar.

Javalina looked at herself, now arrayed as a warrior in bright feathers, but carrying a sword instead of a macuahuilt,[3] and her feet shod in good army boots instead of the heavy sandals. Looking over to the goddess at her side, Javalina was shocked to see a rolling ball of fire, the goddess’s skeletal hand emerging from it, still grasping her elbow, propelling her forward. Javalina smelled the stench of her own flesh burning but there was no pain.

She looked up to see the sitting gods now close enough to recognize. The greater of the two had to be Huitzilopochtli[4] but he was impossible to look upon—his face, helmet, and skin morphing from black to blue to hummingbird iridescence as she watched. Long plumes of the hummingbird shortened and sheened and when she looked again, Huitzilopochtli was indeed a hummingbird, a snake curling about his feet. In another instance he looked like a black-skinned man gripping a mirror in one hand and the snake god in the other. Another second more, and he looked like a warrior, the mirror becoming a small round shield and the snake a flaming atlatl. He was playing patolli with Xochipilli,[5] the Flower Prince, and as she came to their thrones and fell to her knees, the god shouted in pleasure. He must have won the game.

On the way back to her new and rather dingy quarters in Lancaster, south of the fortifications investing the gringos Wall, Javalina had time to compose herself. The god, had called her “Favored” and said that Javalina would conquer in his name under his snake banner, in green-blue colors of the hummingbird. Then, Xochipilli had stood, laughed good-naturedly, and moved aside to let Javalina take his seat opposite the ever-changing Hummingbird. She played the patolli game with the god. Making her last move, the one she knew would end the game with her defeat—she awoke.

As Ximena pulled in to her quarters, she got the word that the Kilabutara Maru had been spotted on the high seas.

[2] A drug obtained from peyote